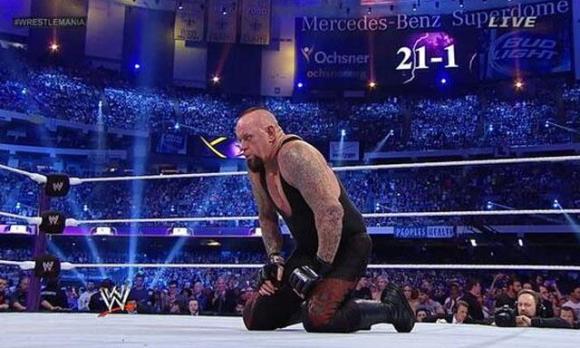 This entire weekend seemed off, like something crazy was always around the corner.

It started yesterday when I went to get my oil changed at Wal-Mart and I watched one of the mechanics take a quick five-minute snooze in my driver’s seat before the job was done. Next it was the guy on Chester Pike who, when he saw me trying to make a left at a changing light, looked me in the eye and shook his head “no” as he sped through the intersection. Then I witnessed a mini cat-fight in the middle of MacDade Blvd at 1:30 on a Saturday afternoon over a plastic bag filled with clothes in someone’s trunk. All of that occured in the span of three hours, 11AM-2PM, while I ran errands.

Now, as I sit here trying to gather my thoughts after yet another fun Wrestlemania gathering, I can’t help but just feel sad. Sad that at the 2:53:44 mark of Wrestlemania 30 (it’s already on WWE Network for replay) my all-time favorite wrestler, The Undertaker, saw his insane 21 win, zero loss streak at the Super Bowl of wrestling shows come to an end. Sad that the one to beat him is a part-time wrestler who has only wrestled in one other match in 2014 beside this one (and that one doesn’t really fit the definition of “match”). Sad that a piece of my childhood has swept away in the river of time, lost forever. I know that sounds dramatic, but it’s absolutely true.

Quick aside: Yes, I am 100% aware that wrestling is scripted, or as detractors like to call it “fake.” “Fake” implies that wrestlers don’t actually get hurt doing these moves or feel any pain whatsoever after a match. “Fake” says that what these guys do is not real, and by that nature doesn’t actually exist. By calling it “fake,” you’re telling me that my eyes have been lying to the rest of my face for the last 24 years, that wrestling doesn’t exist. You’re saying that I didn’t actually go to the Spectrum as a child with my parents, sit right at the guardrail, and watch as my heroes walked right past me to the ring. Did I imagine when Virgil high-fived me? Was I dreaming when one of the Bushwhackers gave me a noogie? I agree that it is indeed scripted, hence why I treat it like a male-focused soap opera, but I will never say it’s “fake.”

There has never been a time in my life as a wrestling fan where The Undertaker wasn’t a part of it. As long as I can remember I think about getting ready to watch wrestling on Monday nights just to see him. Sure I had other favorites, but no one even came close to The Undertaker in my eyes. I played as him in the video games. I dressed like him for Halloween. I had his action figures, foam fingers, you name it. Even during his “American Badass” biker stage I still thought he was awesome (even though that gimmick in hindsight was totally lame). I can still pinpoint the exact moment where Taker became my wrestling icon: January 22nd, 1994, the Royal Rumble, where Taker fought Yokozuna in a Casket Match for the WWF Championship. Mom and Pop had ordered the pay-per-view for me as a birthday gift, and I watched it with my family as a birthday party. Undertaker lost the match when Yokozuna’s gang interfered, but after the match this happened (skip to 18:59):

To normal people, this is campy special effects backdropped by cheesy commentary. But to a little boy mere hours from his seventh birthday, this was the coolest thing in the entire world. The smoke, the screen, the speech, the rising to the ceiling, all of it…it was just incredible.

Tonight I feel like that moment came full circle. I experienced all five of the Kubler-Ross stages of grief in a mere ten minutes:

Denial: “No way…no way! I don’t believe it! I can’t accept this! What just happened?!”

Bargaining: “The only way I’m OK with this is if I find out later on that Taker himself requested this ending.”

Depression: “Now, as I sit here trying to gather my thoughts after yet another fun Wrestlemania gathering, I can’t help but just feel sad.”

Having typed all of my thoughts out, I can now reach acceptance. The reality is setting in: the man just turned 49 on March 24th. He’s made his debut in the WWF/E in November of 1990, a career (assuming he retires tomorrow like I think he will) spanning almost a quarter century. He was a loyal company guy, never jumping ship to WCW or other factions once joining the WWF. He performed to the best of his ability every single night, giving us moves that no man 6 foot 10, 300 pounds should ever be able to accomplish (walking the top rope?!). There’s really nothing else he can give us at this point. He went out with one more shock, even if it was a shock no one really wanted.

One other quick aside before I wrap up: the Undertaker’s loss has reminded me of why I wanted to distance myself from social media for Lent. I went on (it’s Sunday, I’m allowed) to see what people were saying about the match and immediately I saw stuff like “I used to love professional wrestling…and then I turned twelve” or “guys wrestling is fake you’re all dumb for watching it” and so on. It’s one of the worst things about the idea of constant connection: no one is allowed to like anything anymore without someone saying he’s/she’s wrong for liking it. How about this: you like what you like, I like what I like, and neither of us get on the other’s case for it. I remember a time where stories about dragons and swords were reserved for “nerds” and “geeks,” but how many of those not watching Wrestlemania were watching Game of Thrones? I bet a lot.

As I sit here eulogizing the Undertaker’s long career, I realize that I am also eulogizing a part of myself. That little boy who loved the Undertaker and everything he brought to professional wrestling every single night will no longer hear the emphatic GONG that could stop him on a dime. He’ll never again see that man walk down a long aisle beset in blue light, smoke billowing from behind to create the perfect backdrop. The legend has ended, and professional wrestling just won’t be the same without the chance of the dead rising again. People talk about investing time in their favorite TV shows or movies; I invested over twenty years to this professional wrestler, and it seems to finally be coming to an end. It’s bittersweet, but I’m taking the “don’t be sad it ended, smile because it happened” route from here on out.

Thanks, Mark “The Undertaker” Calaway, for two decades plus of entertainment. I doubt you’ll ever read these words, but thanks for choosing to give us your best years on this Earth. You’ll always be my favorite wrestler.