In Defense of the Grinch and Other Christmas Thoughts 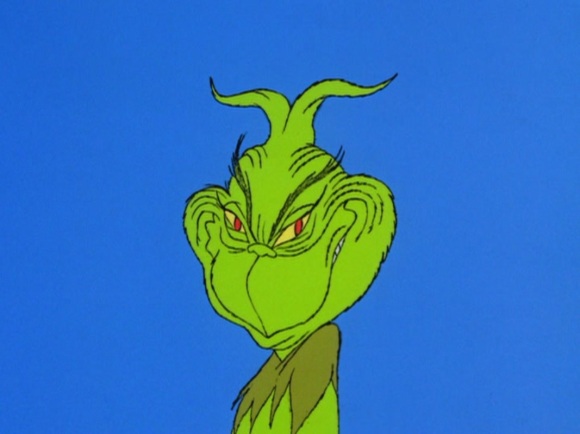 I love this time of year.

In murky skies of “Christmas is too commercial rabblerabblerabble” and an exorbitant lack of “the spirit” in people this year, my house presses on: we’ve decorated inside and out (special thanks to Matt Boyle, my personal Spider-Man, for helping us with the roof lights), we play Christmas music every chance we get, and I personally have been watching the classic Christmas specials on my phone the last two weeks. With such continued exposure, I’ve noticed a few things that young Jason never really picked up on. Here’s what I mean:

The Grinch is completely justified

That poor green bastard is completely misunderstood. He doesn’t hate Christmas (or the Whos, for that matter) just for the sake of hating something; he has some totally legitimate reasoning that’s all spelled out for us. The narrator must be a Who down in Whoville, as he shows very little concern for what the Grinch is truly feeling:

“It could be, perhaps, that his shoes were too tight. Or it could be that his head wasn’t screwed on just right. But I think that the most likely reason of all may have been that his heart was two sizes too small. But, whatever the reason, his heart or his shoes, he stood there on Christmas Eve hating the Whos.”

Oh ok, we’re trying to figure out what makes the Grinch tick, but whatever, let’s just watch him stand there hating everyone for reasons unknown. Except the reasons aren’t unknown: as the Grinch then explains, the arrival of Christmas turns every Who down in Whoville into a stark raving lunatic. Imagine have 364 days of peace and quiet on top of Mt. Krumpet, only to have that serenity shattered by some of the most outlandish noisemakers of all time, all commandeered by a bunch of hooligans. Observe:

In this shot alone, we have a miniature train, two kids on roller skates with giant nets, two more on the same set of stilts (one blowing a trumpet), another with a hammer for Who knows why, and the last little girl practicing archery on top of a narrow, shaky pile of boxes. Apparently ol’ St. Nick forgot to bring SAFETY AWARENESS for Christmas, but more on that in a bit.

THIS DOESN’T EVEN MAKE SENSE. What the hell is the point of this?!

It’s not enough for this guy to bang some cymbals together, no he has himself a giant tuba looking instrument with his own set of wheels. Mobile cacophony deluxe! 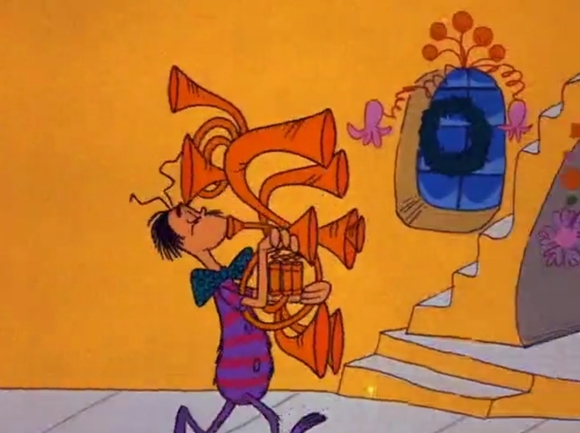 LOOK AT THIS FUCKING THING. Ever stand next to one trumpet at full volume? Imagine the noise Hydra Trumpet here can generate. It even has a little trumpet mouth coming out of a bigger one in the center there. This guy’s favorite word at Christmas dinner is “what?”

As if small children don’t make enough noise, let’s strap a damn bass drum onto the high chair! Oh, and how about some bike pedals so they can zoom around the house whacking the shit out of it to boot? Something tells me that “Who Hash” was missing an extra “-ish” at the end of it…

What, the two giant timpanis on wheels weren’t enough for you sir? You needed a giant bike horn to bite as well? Not to mention he’s locked into that device like he’s HanniWho Lecter…how can that possibly be fun?

This game defies all logic. How does one earn a point? What’s with the drum head that Who holds so the ball can crash through? Furthermore, how do you even play this…

Oh, so it’s a mix of lacrosse and croquet like the Grinch says, but we can also throw couples roller skating in there too. I’d love to know the concussion rate in this “sport.” Has anyone called Roger Goodell?

Here’s the mother of all noisemakers: four Whos blowing into it (accomplishing what, I have no idea), one Who playing the triangle because why not, and a conductor to try and harness this audio atrocity. One guy doesn’t even know what the hell he’s supposed to be doing, he’s just tooting along as best he can, slipping a peak at his neighbor’s sheet music when he gets a chance.

I didn’t even mention the feast, where I can only assume they eat as loud as they play, and the part where they all go outside and start ringing giant bells and singing in the middle of the square AT THE ASSCRACK OF DAWN. I hate it when a neighborhood dog barks at 7AM, can you imagine this mess first thing in the morning?

As some folks who I’ve discussed this with have pointed out, it’s only one day a year, why does old Grinchy-poo have to get so jazzed about one day a year? Well, two reasons: one, with all of the nonsense that goes on here, he has to be thinking about it way before the day even comes, possibly even before Halloween. That’s a steady two months of straight up dread before Hurricane Christmas brings a downpour of loudness. Second, and more importantly, it’s not like the scene we’re watching is the first time the Grinch has faced this situation…

Fifty-three years. Fifty. Three. Most of the people I gather with at Christmas haven’t been alive as long as the Grinch has been exposed to this noise torture. Wouldn’t you try to stop it any way you could too?

I don’t blame the Grinch, not one single bit. 53 years is too long to put up with that shit.

Nothing in this theory is substantiated, it’s merely an observation realized by watching multiple specials back-to-back-to-back, but it seems to me that Rankin-Bass tried really hard to make Santa Claus into a royal asshole. I have five Rankin-Bass specials in my rotation of eleven shows, and in all five of them this jolly old elf isn’t exactly the paragon of politeness that he makes himself out to be. Here’s what I mean: 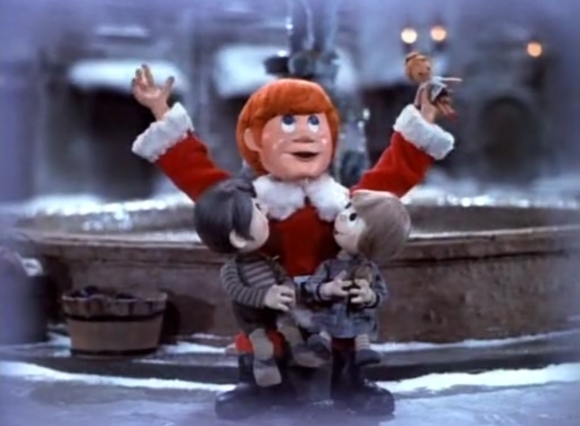 Santa Claus is Coming to Town gives us Kris Kringle’s origin story and how he came to be the lovable Santa Claus. Granted, the Burgermeister is an oppressive prick who just needs to watch where he steps, but we learn that Santa Claus got his start as a wanted fugitive, avoiding responsibility and fighting “the man.” Oh, and he married Mrs. Claus in the forest surrounded by animals…is that legally binding?

(This was the weakest example, I promise. It gets better from here.)

The oft-forgotten Twas The Night Before Christmas begins with the entirety of  Junctionville getting their letters to Santa returned to them adorned with a giant “Not Accepted by Addressee” stamp. Why would Santa crush the dreams of the town and its people like this? Because someone (the crying mouse pictured, yeah a MOUSE) wrote a letter calling Santa a “fraudulent myth” among other things, and St. Nick got his cherry-like nose all twisted. Does Santa have Twitter? I sure as hell hope not, or else he’d never deliver a single gift again with this level of sensitivity. It took a massive clock literally singing Santa’s praises to change his mind. How pompous is that?

Keeping with the “lack of forgiveness” theme, Frosty the Snowman‘s version of Santa lays down the mother of all threats to the magician Professor Hinkle:

Hoo boy, the man can’t even touch the hat that, despite his throwing it away, rightfully still belongs to him. Oh, but Santa gives him a chance to repent: “Now you go home and write “I am very sorry for what I did to Frosty” a hundred zillion times. And then maybe – just maybe, mind you – you’ll find something in your stocking tomorrow morning.” Except it will take him far longer than tomorrow morning to write all that out, so you have no intention of keeping your end of the bargain, you old liar. Apparently ol’ Jelly Belly here doesn’t feel the same way about forgiveness as his Christmas co-sponsor Jesus does.

In A Year Without A Santa Claus,  our boy just doesn’t feel like coming. “There’s not enough spirit, I don’t feel good,” etc. Certainly cares about all the children of the world, doesn’t he? I wish I had the luxury of not working just because I didn’t feel like it. Let’s not even get into how he reveals, in song, how he yelled at a young child, in the middle of the night, as he lay in bed, about not believing. That’s professionalism right there.

Perhaps worst of all is the Santa we see in the original Rankin-Bass classic Rudolph the Red-Nosed Reindeer.  This Santa is a total jackass from pillar to post, first telling Donner that Rudolph wouldn’t be on the sleigh team because of his nose, then publicly emasculating the poor deer when Rudolph’s disguise doesn’t hold up (pictured). “Donner, you should be ashamed of yourself!” What the hell for? He did what you basically told him he had to do, hiding the nose so Rudolph could be accepted. It’s not just deer that face his wrath either; take the elf practice scene for example, when Santa is a total DICK to the innocent little group of elves. First he rushes them along, telling them to “let’s get this over with” as he has to “go down and look over the new deer,” then offers ZERO critique other than “well, it needs work” before he cuts and runs. Thanks for that, St. Dickolas. Add to that how his picky eating habits resemble that of a crying four-year-old, and you have one Santa who belongs on his own naughty list.

I had a little fun here with some classic television, but believe me when I say I love every second of all of those shows. I revel in being able to sit down with family and watch them, even though I get wayyyy too involved with their sub-plots.

I hope I was able to give you a laugh on this Saturday before Christmas Day, and I wish the Christians reading this a merry Christmas, the African Americans a happy Kwanzaa, I hope the Jews had a great Hanukkah a couple of weeks ago, and a great Tuesday to the atheists out there. Regardless where you fall in that group, Happy New Year too!

I leave you with the best rendition of We Three Kings you’ll ever hear.